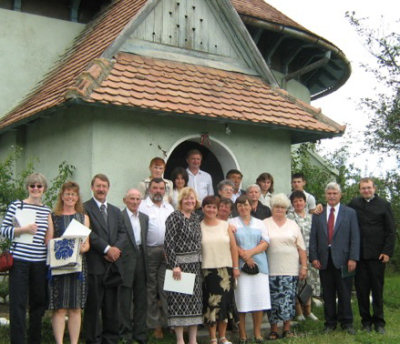 Since 1993, BUUF has been partnered with the congregation of a beautiful, historic Unitarian church in the village of Mészkő in the Transylvanian region of Romania.

Our partnership was shaped during a time of tremendous social and political unrest in Romania where ethnic Hungarian, Unitarian communities continued to suffer discrimination and persecution even after the fall of the Ceaușescu regime.

Through the years we have sometimes communicated in fits and starts. We bore witness to one of the most tragic things that can befall a congregation: the downward spiral of their beloved minister, fueled by alcohol and financial desperation, ending in his tragic suicide in March, 1998.

During this time, the Partner Church committee looked for ways to further the ties of partnership with our partner congregation. Aside from roughly $2,000 forwarded to the congregation in the early years of our partnership, until recently, financial support of our partners had been sporadic and in relatively small amounts. Our committee was in awe of other American partners who bought tractors, built cooperative dairies, financed new churches, and created scholarships and youth centers. We wanted to do something too, but took the advice of experts in building church partnerships, and decided to concentrate on establishing relationships first. 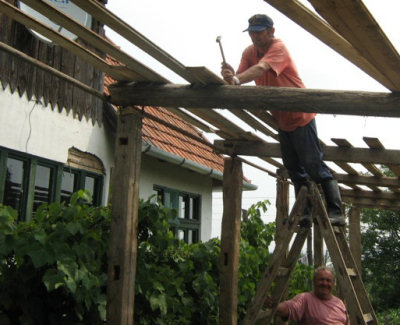 Examples of the relationship building include: the exchange of gifts such as children’s books and tablecloths; visits from members of our congregation (nine visits since 2001) and our minister; and two visits from Mészkő’s minister, Zsuzsa Bartha in 2001, and a visit from Mészkő’s current minister, Robert Bálint, and his family in 2009. It also included the creation of the Transylvanian Bridge on this property (completed in 2000) in honor of our partnership. This bridge serves as a symbol of our mutual desire to build bridges of understanding between our two congregations. Our partners are so proud of this bridge. They see it as an enduring symbol that they are not alone. Since 2011, the BUUF choir members have proudly worn the beautiful stoles created by the women of the Mészkő congregation in traditional Transylvanian embroidery.

In our visits to Mészkő, BUUF travelers met several times with the board of the church, seeking out new ways to understand each other, and also attempting to find out how we could help them. There were very frank, sincere, open discussions with this group of dedicated individuals. But when the subject of how we could help the congregation would come up, the members were reluctant to ask for any specific thing.

Finally in 2004, we made a tremendous breakthrough. The previous two years had been so hard for their congregation. For the second time in three years they were without their full time minister as Zsuzsa Bartha was on a two-year parental leave after the birth of her son. In Unitarian churches in Transylvania, the minister is responsible for the majority of all the church work. They were so worried that the life of the church that has brought comfort to the community for over 400 years would be sorely tested during this time. One of the older members of the community asked us: “Have you ever had to deal without a minister? Who visits the sick and the dying?” We told them about the history of our fellowship: how we started without a minister, how we have gone through times between ministers and when our minister was on sabbatical or medical leave. We gave examples of committees that worked together to perform the work of the church. 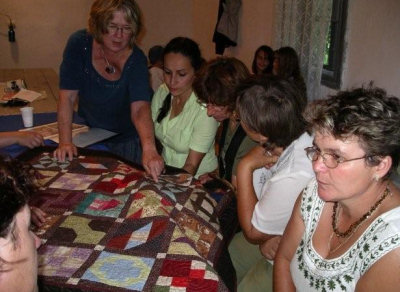 This simple story was the impetus for them to finally ask our help for one major thing: The expansion of their community house. Through contributions from our Fellowship over the years, and contributions and hard work on the part of the Mészkő congregation, in 2012 they were finally able to complete the transformation of their tiny and inadequate community house into a larger, functional building that can serve as a community hub, and also house church services in the winter.

Since 2012, the Partner Church Plate Partner has been the Boise-Mészkő Scholarship Fund. Education is one long-term strategy to break out of the cycle of poverty, but going to college means paying tuition and expenses of approximately $850 per year. This is beyond the reach of many families in Mészkő. The Boise Partner Church Committee is committed to continuing to subsidize expenses for qualifying students of the Mészkő congregation.

The 6th principle of the Unitarian Universalist purposes and principles is “the goal of world community with peace, liberty, and justice for all.” Being a partner with the congregation in Mészkő has helped our fellowship realize this goal. It has been the bridge that connects our congregation to the world. Our partnership with Mészkő has helped our congregation to grow in understanding of the impact of social action. Awareness builds as Unitarian Universalists focus on our place in the world and our leadership in socially responsible acts.