Seventeen BUUF congregants will soon complete our first Quest program. The Quest program is designed to guide participants in personal spiritual deepening. The program is a 19-month journey composed of six weekend-long retreats, monthly small group meetings informed by Parker Palmer's "Circles of Trust" as described in A Hidden Wholeness, instruction in one of three spiritual practices and commitment to daily practice as well as a one-on-one relationship with an experienced Spiritual Companion. 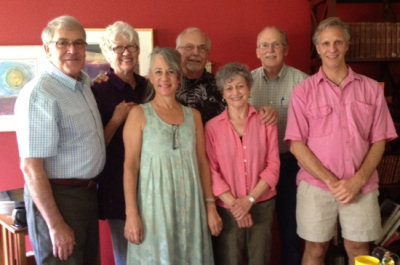 Quest was developed at First Unitarian Society of Madison, Wisconsin (FUS) in 2002-3 by a sage group of lay people with the support of over $25,000 in Chalice Lighter grants. Parish Minister Michael Schuler and Religious Education Minister Kelly Crocker led Quest I in 2004-6 of which BUUF's Quest Spiritual Program Director, Jackie Groves, is an alum. Associate Minister Karen Gustafson led Quest II (2009-2010) and Quest III (2012-2014). Jackie served on the FUS Quest Steering Committee for Quest II. The UUA lent their support to the project out of a sense that our congregants are longing for the opportunity to have a substantive spiritual deepening experience. FUS has seen consistent growth in the number of participants in its three offerings. FUS Quest alumni have fanned out into the congregation and the community creating new ministries both within the congregation as well as in Social Justice.

Since returning to BUUF in 2011, it has been Jackie’s ministry to bring Quest to us. With support from BUUF’s former minister, Elizabeth Greene, our current Interim Minister, Dana Worsnop, the strong Quest Ministry team they built, and BUUF leadership, the Quest program has taken root and flourished.

Eighteen applicants were selected for participation. Spiritual companions and spiritual practice instructors were recruited and the first Quest weekend retreat took place Labor Day weekend 2013. Monthly small group meetings and Quarterly Spiritual Companion workshops have been conducted since the beginning of the program. The participants have shared that the value their experience in Quest is creating in their lives is significant. It is impacting them, their families, and the entire congregation in the form of new ministries.

Quest has supported the congregation during this time of transition, not only the participants themselves but others who have benefited from the transformational and healing energy and action that participating in Quest creates. Quest is a critical way in which BUUF has been and can continue to grow in being a beacon for the healing and transformation of our congregation, our community and beyond.